Music, Blok, Gogol and "The Tempest"

In an article by James David Jacobs about Shakespeare and music he writes
"The Tempest stands at the crossroads of theatrical history: between the Renaissance and the Baroque, between the Elizabethan theatre of the imagination and the Jacobean spectacle, between the primacy of the word and the primacy of sensory entertainment".
Similarly The Fairground Booth was written and performed at the threshold of a new epoch in 1906 in Russia.


The common link between these plays is music. It's no coincidence that at the same time these upheavals were taking place in England, the art form known as opera was being born in Italy (the first operatic masterpiece, Monteverdi's L'Orfeo, was premiered in 1607.) And it is not an accident that The Fairground Booth appeared at the junction between two epochs and the beginning of what we understand as the modern era.

Showing this short film to a live audience tomorrow in Moscow. Never expected to present it as such so a bit nervous how it will be received. Was at the venue today checking things out. Good sound - which is welcome as the soundtrack is important.

The film was shot in Tokyo and since it has been released on You-tube I have re evaluated the film and re edited it slightly for this particular presentation due to the specifics of the presentation. I will blog about that later with pictures and possibly a video clip of the event.

I have been worrying about it for several weeks now mostly about how I would present the film to the audience but all those problems seem to have been solved. The work that I put into this video is now starting to pay dividends in terms of new projects and ideas for films. All the practical experience on this film portended a completely new direction.

Have also been working on much of the writing. The next book about the Russian theatre  is in the proof reading stage and the publication date will be announced soon, probably  just before the spring of this year.

Posted by Michael Craig - Copernicus Films at 10:59 No comments:

Encounters with the Russian Avant-garde

Fully illustrated including stills from most of the films, it is not only an account or explanation but also an introduction or to be more specific an "encounter" with this exciting phenomenon. The title reflects an active relationship: firstly through the experience of living in Moscow for many years, plus a direct encounter with the buildings, the architecture and the very territory in which much of the avant-garde arose and to some extent still exists. Encounter suggests something more casual, unexpected and unstructured but also a sense of living in the avant-garde and being part of it. After all it was the intention of the Russian Avant-garde to connect with the real lived world and to ‘take art out of the galleries and onto the streets and squares of Moscow'.http://www.copernicusfilms.com
Posted by Michael Craig - Copernicus Films at 04:33 No comments:

Dostoevsky and The Fairground Booth

Dobuzhinsky’s illustration for the set of “The Devil’s Play”
This chapter and section will give an extra depth to the discussion about The Fairground Booth. It will also serve one of my intention which is to put the play in the wider context of Russian and European literature.
Attached are the frontispiece for The Fairground Booth and the set design for the fist part of  The Devils Play by Remizov
+Russian Theatre Documentary Series
thefairgroundbooth.com michaelcraig.copernicusfilms.com
#Dobuzhinsky #thefairgroundbooth
Posted by Michael Craig - Copernicus Films at 03:51 No comments:

"The Fairground Booth" and "Petrushka" 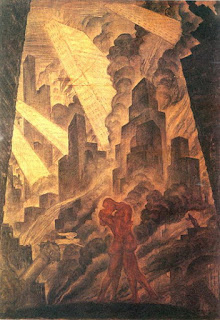 This post is a fragment from a chapter of the book which will be published some time next year. The context is a comparison between the ballet "Petrushka" and "The Fairground Booth". Both share roots in the Russian fairground and the figures of the commedia dell'arte. To understand a play like The Fairground Booth which has no plot, no characters, no real sense of forward movement or natural time and broke from the traditions of realism and naturalism, requires an approach to Russian culture which moves beyond its surface reflections. When, as Bakhtin states, Dostoevsky's work embodies elements of carnival, (something which is not immediately associated with Dostoevsky), then it becomes clear why it is possible to find clues to the meaning of "The Fairground Booth" in works of literature as various as "The Brothers Karamazov" and The ballet "Petrushka" and vise a versa.
For those seeking unadulterated cultural forms this approach may be disappointing. However it is in this spirit, if we understand the play itself as a mask, that "The Fairground Booth" will reveal itself. The essence of this play is that it embraced contraries and opposites and did so deliberately in order to open up theatre to some kind of change or reconstitution, something which was desperately needed in theatre at the time and was pursued by Stanislavsky, Meyerhold and Vakhtangov each in there own fashion. New modes of thought born of a new age called for new modes of expression. But where to find these new myths and new forms. Blok turned to the tradition of the fairground with its timeless puppets and the Italian comeddia dell'arte with its eternal masks and together with Meyerhold they forged the beginnings of a new theatre. 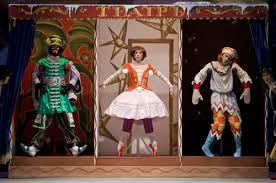 The examination of the ballet "Petrushka" has led us to a wider contemplation of the Fairground Booth itself. We can go a little further and examine some of the paintings and works of the artists of The World of Art movement with Benois as one of its leading figures and the author of the libretto of "Petrushka" in relation to "The Fairground Booth" in which the figure of Pierrot and the Russian version Petrushka are on some levels interchangeable. There is a painting which caught my eye partly for its apocalyptic character by Dobuzhinsky called "The Kiss". It shows a couple embracing against a futuristic apocalyptic background, a city-scape shrouded in mist and smoke and self combustion. It is strangely alluring and threatening all in one glance. The naked couple is reminiscent of Rodin's "The Lovers" but more in keeping with Klimt's "The Kiss". It is not immediately connected with carnival until we look a little further. 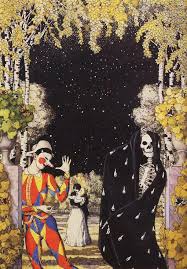